Recently, the Hog Roast Lichfield team were hired by Carrie for a 40th birthday party which was hosted at the client’s home. The food was served outside under the team’s marquee and was served to 100 people. It was important that there was enough food to go around and there was a great selection of food to please all of the guests. The Hog Roast Lichfield team delivered Menu Three to Carrie’s numerous guests. The menu featured a whole slow roasted hog which was served with sides of homemade stuffing, crispy crackling and fresh apple sauce. 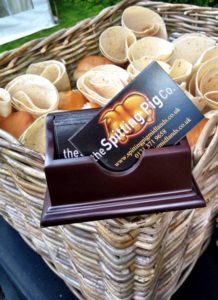 The hog was cooked to perfection in one of the team’s Hog Master machines and was presented as the centrepiece of the buffet and it looked fantastic. As well as the traditional sides, the team also served a selection if three freshly prepared salads and bowls of warm new potatoes in herb butter. The meat was also served with bread rolls and wraps to help keep the buffet casual as well as a selection of classic sauces. The meat was carved professionally by the team’s chefs and presented professionally on the buffet table. The Hog Roast Lichfield team also served a vegetarian alternative of lightly grilled vegetable and halloumi skewers which were served with pitta breads and Tzatziki dip. The food was served on disposable crockery to help to enforce the casual atmosphere.

The Hog Roast Lichfield team’s chefs, Kris and Edyta, served up a beautiful buffet that was enjoyed by all of Carrie’s guests. The client had a fantastic evening and they really appreciated the work that the team put in to making their birthday special. Many of the guests returned to the buffet table for second portions as they really enjoyed the food. Carrie also thought that the team delivered a really professional service and they were really friendly to all of her guests. The Hog Roast Lichfield team also cleared all of their waste away after the hog roast service discreetly and the client was impressed by their commitment to this. The client said that they would definitely recommend the team to her friends and family.